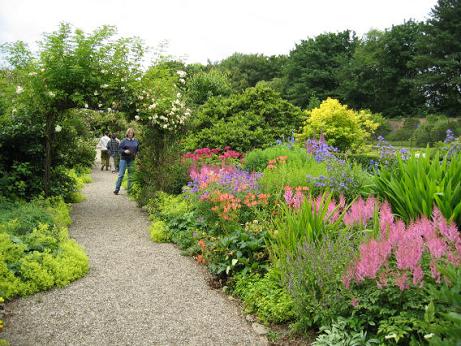 This historic estate was built in the 1630s and owned by the Montgomery family since 1798. Most of the landscaping and planting of the mature trees was carried out by them in the years 1800-1820. The Walled Garden, about 2 acres in area, appears on a map dated 1788 and has been cultivated since then without interruption, although with alterations to the layout from time to time.

The garden is one of the finest and best maintained in the North of Ireland, described by Terence Reeves Smith in his Guide to Irish Gardens as “undoubtably the best in private hands and ranges from beautiful rose beds to a well stocked kitchen garden”.

The extensive pleasure grounds stretch down to the banks of the River Bush which is spanned by a splendid iron bridge 90 feet long, erected by Robert Montgomery in 1878.

The Woodland Pond was orginally created in the 1850’s but fell into dereliction. It has been reclaimed in the last ten years and further clearances and planting are in progress.

The cobbled stable yard, entered through an archway surmounted by a pretty cupola, is an unusual diamond-shape and contains the stables, coach houses, cart houses and a tea room, converted from a former stable. There is also a small collection of farm and garden implements.